Six intrepid BTCers made the 4 hour trek to Guysbrough, Nova Scotia to represent the club at the Doctors TriNS Club Championship for 2013. Mary Chisolm, LoriAnn Ross, Jamie Veinotte, Bev Richardson, Steve Saunders and David Aggett entered the Sprint Distance race which was the basis for the Championship. Jennifer Aggett also participated as the Swim Course Official, and Penalty Box Tender. Despite earlier calls for precipitation, conditions were near perfect for the start. Men started first after the Olympic swim competitors exited the water, followed shortly thereafter by the women. This race had an in-water start and the first leg was directly into a breezy chop. One loop of the triangular course and we were on our way on the bikes. The Technical Delegate for the race insisted that bikes be racked very closely together, both to emulate modern international races, and so the transition could accommodate the 170+ racers. For those of us used to the Fancy Lake setup, this came as an interesting challenge to limit our baggage and fit all our stuff in a space directly below our bikes and no wider than the width of our handlebars.

The bike course rolled west out of transition and through town. Traffic control was excellent and the various turns and turnarounds were well marked and controlled by volunteers, police and fire personnel. From the transition to the turnaround, the breeze kept us all on our toes, as some of us were blown around a bit. On the return, the wind was more behind us and speeds picked up on the rolling course. It was quite possible to do the entire course while seated.

The transition was one long single bike rack, necessitating an extended run from the dismount to our gear. We were to find out later that our bike times included both the long run up from the swim exit and T1, hence the slow speeds given in the results page at Atlantic Chip. The run was an out-and-back affair commencing at the east end of the transition and following the harbour along a scenic but slightly uneven gravel and grass track. There was plenty of water and Gatorade available from the host of cheerful volunteers. The finish chute was located behind the Rare Bird Restaurant on the waterfront.

Although the fact that we had an incomplete team prevented BTC from figuring in the Championship battle, individually our members all performed admirably. Everyone finished with a smile on their faces. Jamie Veinotte was a man on a mission, placing 15th overall out of a total of 104 finishers, in a field laced with ringers. Bev Richardson and David Aggett both placed 3rd in their age groups. Mary and Lori Ann both placed in the top half of their respective age groups. Overall a very respectable showing. Unfortunately, we weren't able to kidnap Norma Patterson and spirit her off with us to Guysborough so there's no group photo. However, it was a great race which we participants will not soon forget. We're already conspiring to see how we can get a full team for next year's challenge. Once we have details, we'll let you know. 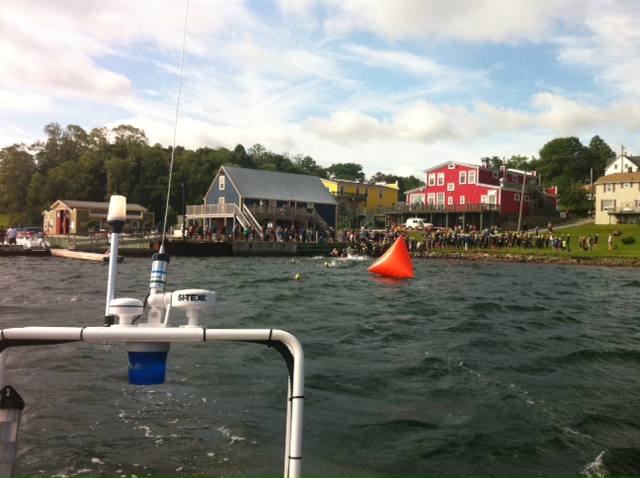